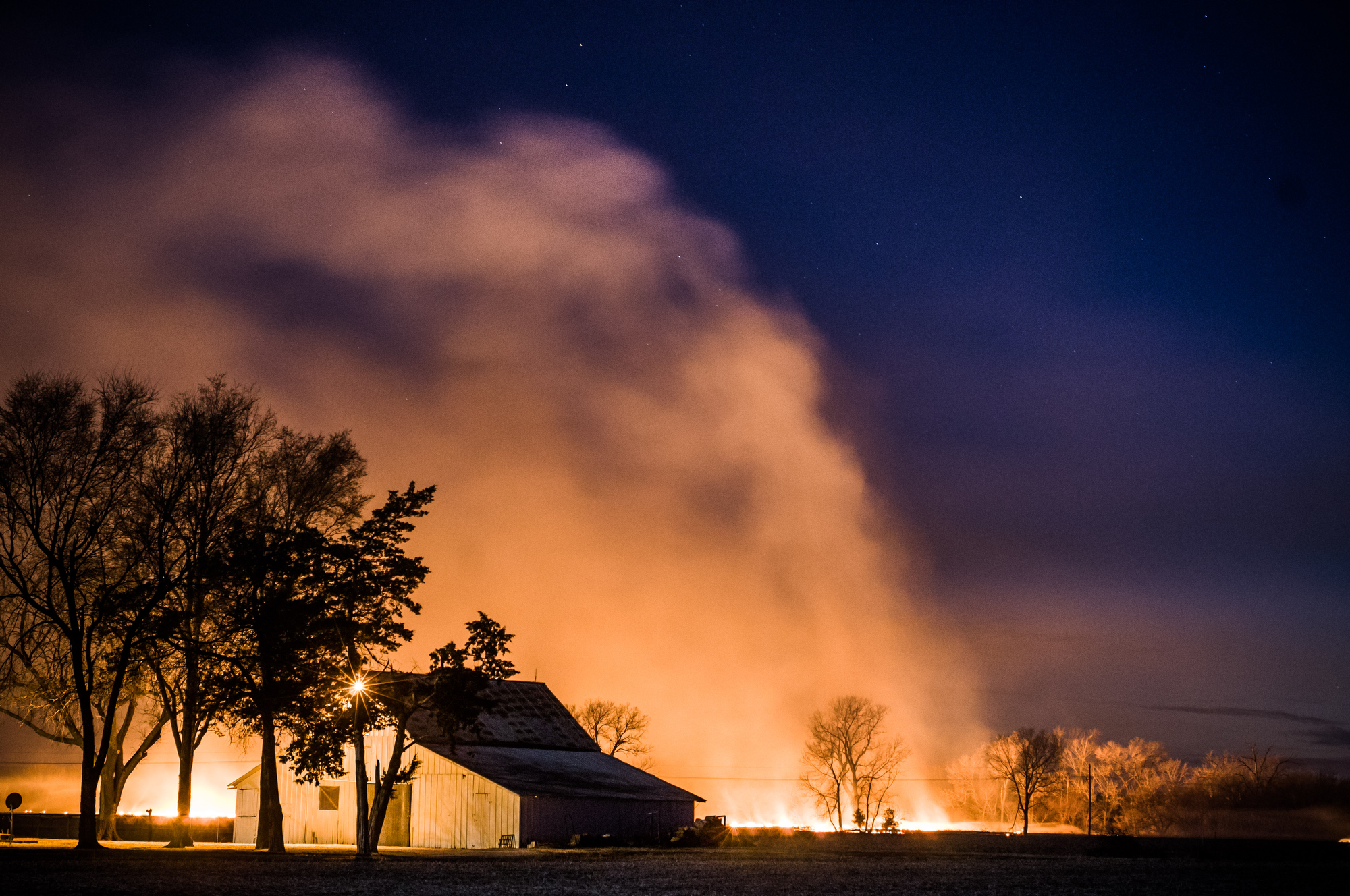 On the way home from a high school state basketball tournament game in Manhattan tonight, I came upon a glow on the horizon as I drove through the scenic Flint Hills under clear skies and a bright moon that lit up the landscape around me. As I came into Americus, Kansas, I began to see my first glimpse of the prairie fires that I've been told about by so many people since moving here. I cut off on a gravel road, our paper's sports editor in the passenger seat interested in checking the fire out as well, and drove toward the flames and silhouettes of trees we could see in the distance. In my typical fashion, I would drive a bit, then see a view I wanted to shoot, so I'd stop the car to snap a few frames and drive on. This repeated quite a few times down the road. We finally got close to a house and barn that were right next to the field being burned, and I knew I was going to be able to get the shot I had in mind since turning onto that gravel road.

So why the burning of the fields in the first place?

The burning of the prairie every spring is part of a fire ecology that is essential to the health and livelihood of the region. After a harsh winter, there is an accumulation of dead biomass lining the earth where new plants and grasses are trying to grow. Many of the nutrients are locked up in the dead material, and, if left to rot, it would take months for those to return back to the soil. The burning of the grass makes them available in a matter of minutes, as well as removes the dead material that is shading the ground, allowing the new grasses to photosynthesize. This, in turn, promotes the growth of the diverse range of grasses and plants that are found here and will be grazed upon by thousands of heads of cattle over the coming months.

As a lifelong Californian up until a few months ago, where fire policy follows a completely different concept, it's so interesting for me to see a system that mimics the nutrient cycle found in nature. Out there, fires are fought aggressively, and efforts are made year-round to prevent the slightest spark from reaching dry grasses. While this is a great idea when the fires aren't happening, the consequence of this plan is that each season's dead biomass builds up to the point that the ground is full of flammable material that erupts into deadly, fast-moving brushfires once it ignites. It happens over and over there, that some careless human action or a simple act of nature, like a lightning strike, sparks a wildfire that burns uncontrollably.

With this being just my first chance to catch a glimpse of these fires, I look forward to getting out on some backroads over the next couple months to search for more of that glow on the horizon that will lead me to more sights like the one I found tonight.